It was the weekend “before” that we were recognizing just how much fun grandparenting can be. She had picked Ella up after we kept her for what we thought was time for her to work some extra hours and as they drove away we looked at each other and said…

Grandparenting is awesome! Grandparenting is parenting but it’s grand. It’s grand in the sense that we get to love on and have fun and then send them home and return to sleeping all night…no more poopy diapers, no wiping anyone’s boogers, no listening to cries that require deciphering (is she wet? hungry? uncomfortable? cold? too hot? is the tag on her dress scratching her?…) Yep…grandparenting is temporary, safe and loving care of your kid’s kids so the parents can have a break from diapers, boogers, sleepless nights and wondering why the heck they won’t stop crying.

Grandparenting is the easy part.

I know. I did it…3 times…3 times that required me to put self aside and tend to the needs and wants of a helpless creature called a baby. I look back and honestly don’t know how I did what I did…but I did it.

I did it because I had that something-something…It’s called maternal instinct.  The bond that forms between a mother and her offspring initiating a desire to protect and nurture. I was accused at times of overprotecting. The world was filled with sneaky copperheads hiding in the bushes, roller coasters that would roll off the track, razor scooters going down steep hills that would most definitely flip and knock out your pretty teeth, and seatbelts that if not buckled up would drive this momma crazy…ugh…We had family members that saw car seats and seat belts as inconvenient and a big hassle. I’m not kidding. I once had an argument with a grown man over him refusing to buckle up my baby. I saw my children as my responsibility and if I could do anything to prevent them from pain or harm I was on board…I was called crazy for my seatbelt persistence. I’m totally okay with that. Their safety was my job and I built a fine resume.

As I’ve said before…none of my children were “planned”. They were big surprises…but let’s face it…the result of having sex. I mean really. You can’t have sex and then act shocked when you find out you’re pregnant. The term unplanned pregnancy blows my mind…Like, you have sex but you don’t plan on getting pregnant? I eat too much queso and I don’t plan on getting constipated…but I do…Is that unplanned constipation? I stay up late binge watching Gilmore Girls and can’t hold my eyes open at work…Is that unplanned fatigue? Unplanned is when you are starving and you go to your favorite local dive and you order a grilled chicken sandwich with a side of sweet potato fries and find a hair that most definitely does not belong to you…gross…this is not mine and I did not ask for it. You can take this food back to the kitchen…I didn’t plan to leave without eating but I’ve suddenly lost my appetite. Unplanned is when you are backing up your new Toyota 4-Runner and you hear a crunch and get out to realize you’ve hit the bumper of the small truck that belongs to the pharmacist at Walgreens. Oops…I didn’t plan to spend $1200 on car repairs this month.

Unplanned is also when you get a call that your grandchild is not in a safe environment and you need to act quickly, making sure that precious child is out of harm’s way and unafraid. Not in your plans, but you will change all your plans out of the love you have for this child.

I read that in the United States alone, more than 13 million children are living with their grandparents. It’s a growing epidemic in our society.  I know when I was teaching high school I had a good portion of my students living with grandparents or extended family members due to the fact their parents were either unfit, incarcerated or living in a manner that provoked the removal of children from the home. 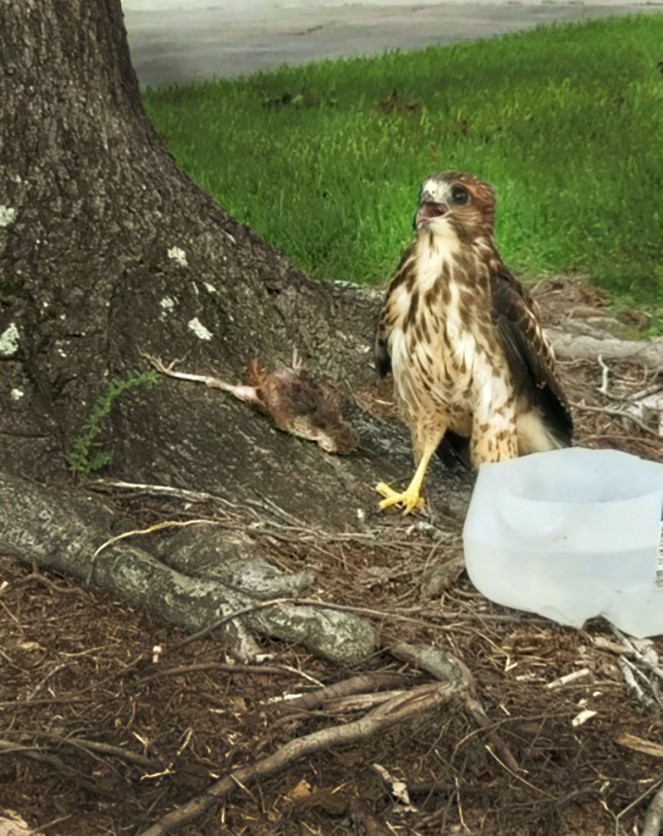 He was driving when he saw what he thought was a blown tire carcass curled up in the road, then he noticed it was moving… he slowed down to realize it was a hawk. Another lady saw the same thing and pulled over…they both saw that the hawk was standing over her dead baby in the road…Kurt was able to move both the hen and her baby out of the busy road and over to a safer location by a nearby tree. The next car on the scene was a young lady whose sister attended vet school at LSU. She made a call as to what they should do because the mama was hurt and needed care, but she was no way leaving her baby.

As he was telling me I began thinking…even the animals know to care for their babies. What is wrong with someone who puts their child in danger as opposed to shielding them from it? Breaks my heart…

Please pray for the babies that are not blessed with good parents. They can’t help who their parents are…they didn’t get a choice…they didn’t get to look at them and say, ummm no thanks, I don’t want you….you are an inconvenience. Nope.

Sweet Ella, we were there the day you arrived and we will always be here for you.

We love you so much…